The winery and the vineyard

Tedeschi wines have become synonomous with terroir and Valpolicella around the world as a result of their constant and meticulous labor in the vineyard over the years.
Nothing is ever left to chance. The profound attention to the vineyard includes research to uncover a perfect interaction between the chracteristics of the soil, the microclimate, the sun exposure, the choice of the most appropriate varietals and the cultivation system.

A great wine – authentic and rich in character – can only emerge from perfect grapes.

As producers of Valpolicella, Amarone  and Recioto in Valpolicella for centuries, along with the obligatory autochthonous grapes in our own vineyards we also cultivate a small percentage of lesser known varietals that are nevertheless traditionally used in Valpolicella including Oseleta, Dindarella, Negrara, Rossignola and Forselina. 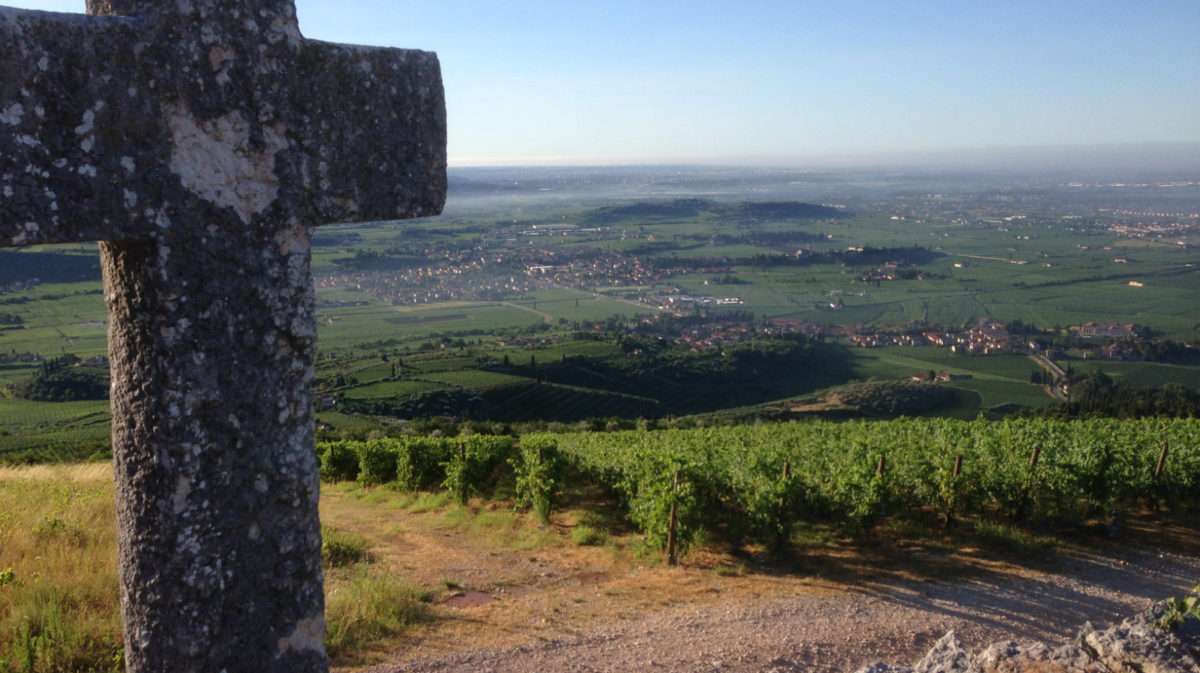 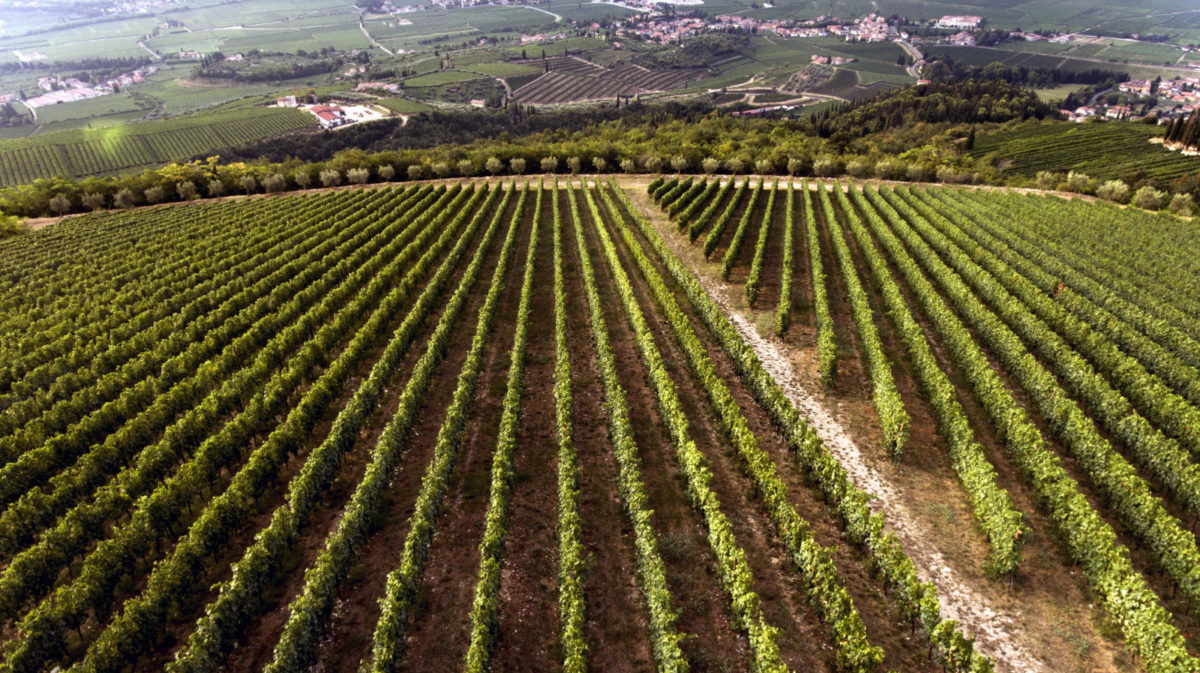 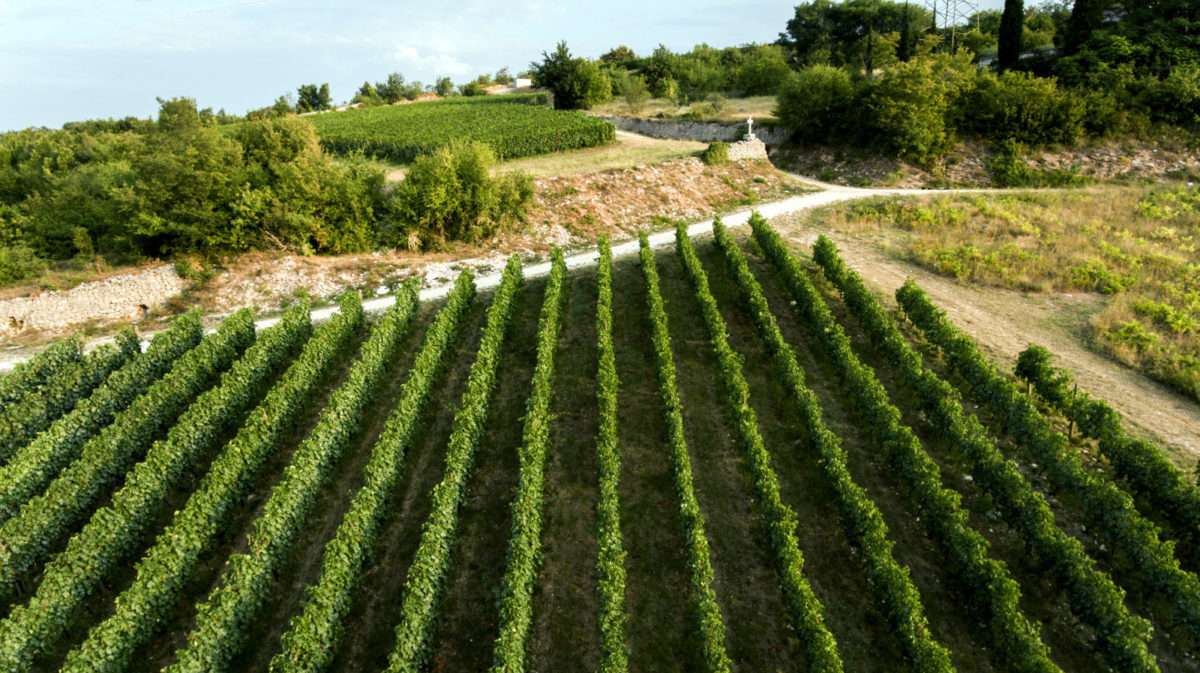 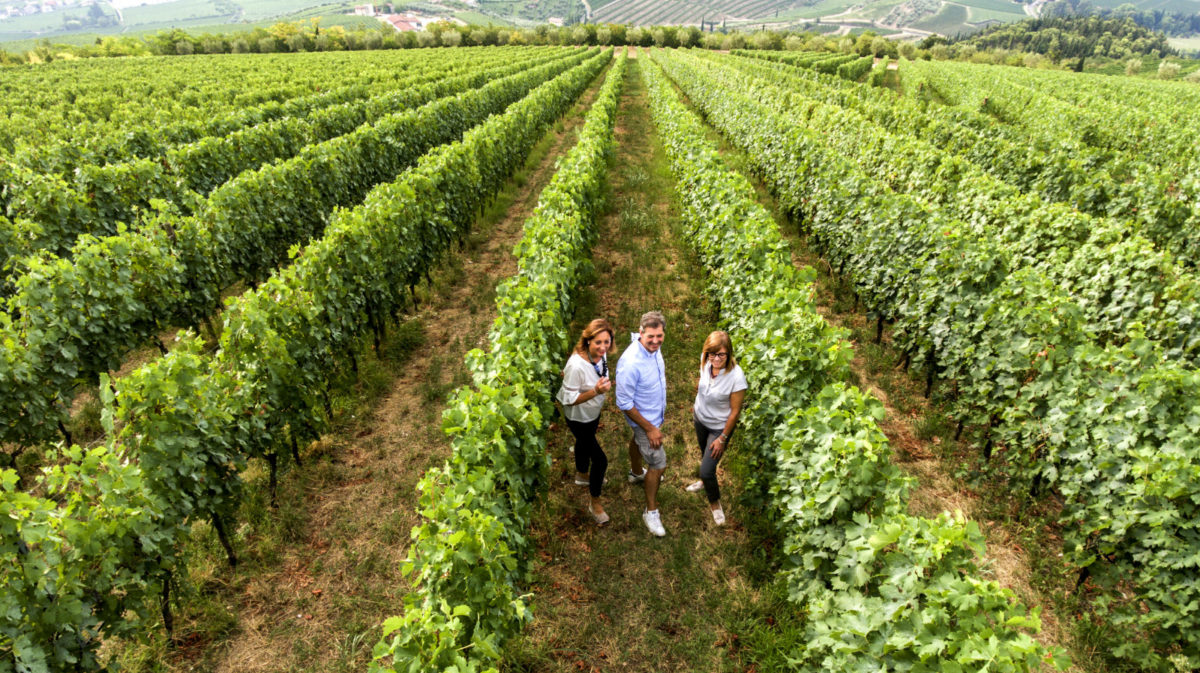 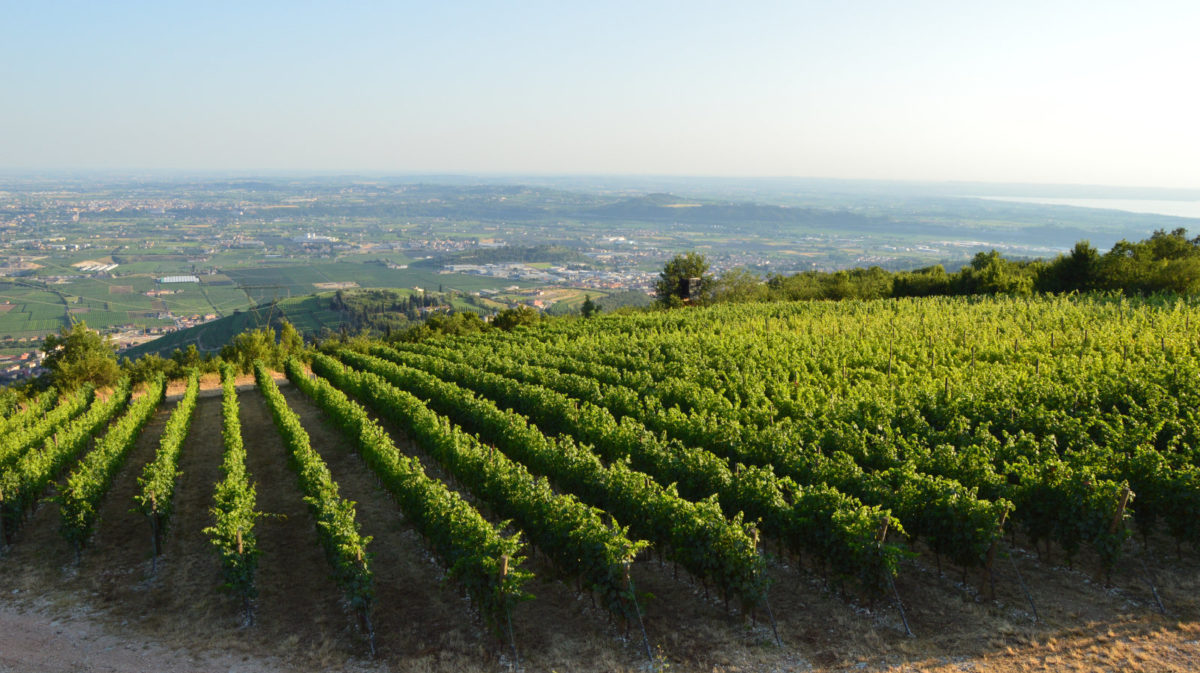 This vineyard is located in le Pontare between the communities of Fumane and Sant’Ambrogio in Valpolicella. Situated in a panoramic position between 430 and 500 meters above sea level the 7 hectares  that make up the vineyard overlook the entire valley of  Valpolicella classica, the city of Verona and Lake Garda. The vines have been trained in the Guyot style with a high density of plants equal to 7,200 plants per hectare. The terrain, characterized by whitish pink marl, is shallow, rich in skeleton and very calcareous.

The name La Fabriseria derives from a popular Veronese tradition. At the beginning of the 20th century, La Fabriseria was the village parish counsel that was tasked with the construction of the new church. The adviser/vestryman, known as the “consigliere/fabbricere”, was also Riccardo’s grandfather.

It was customary for the advisers to take the best wine that each of them produced to their meeting in order to make a toast once their work was done. We have borrowed the name La Fabriseria from this ancient custom and given it to two of our top of the line products: Amarone La Fabriseria and Valpolicella Classico Superiore La Fabriseria the grapes for which originate from the vineyard of the same name. 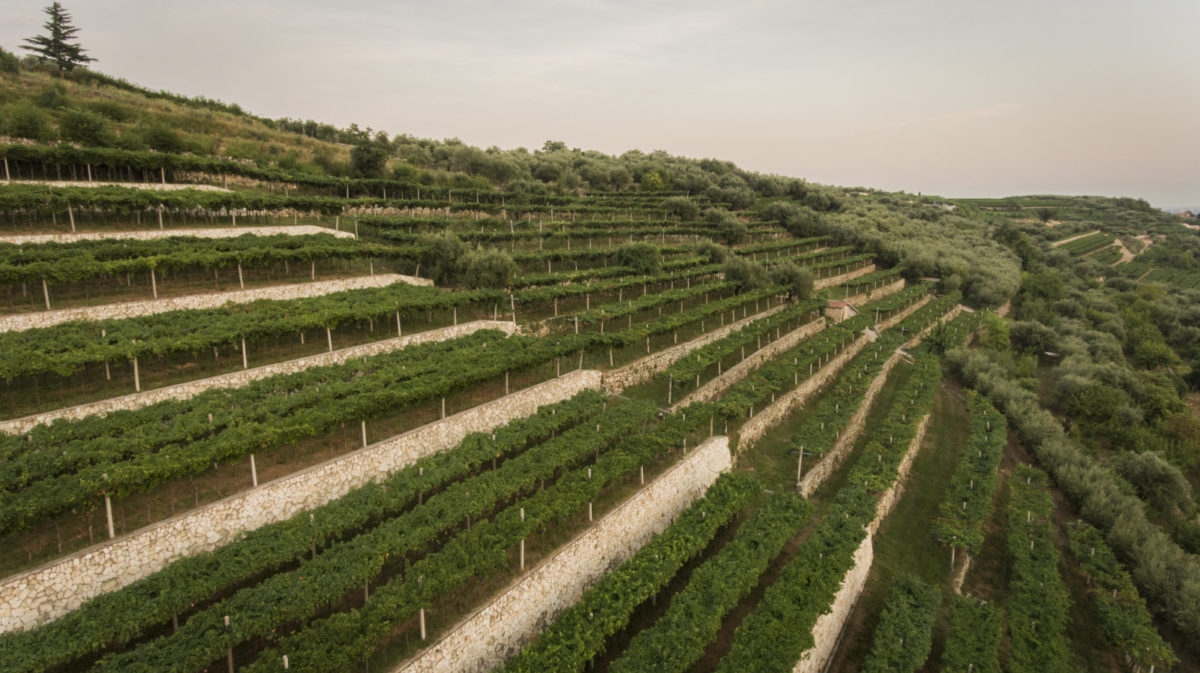 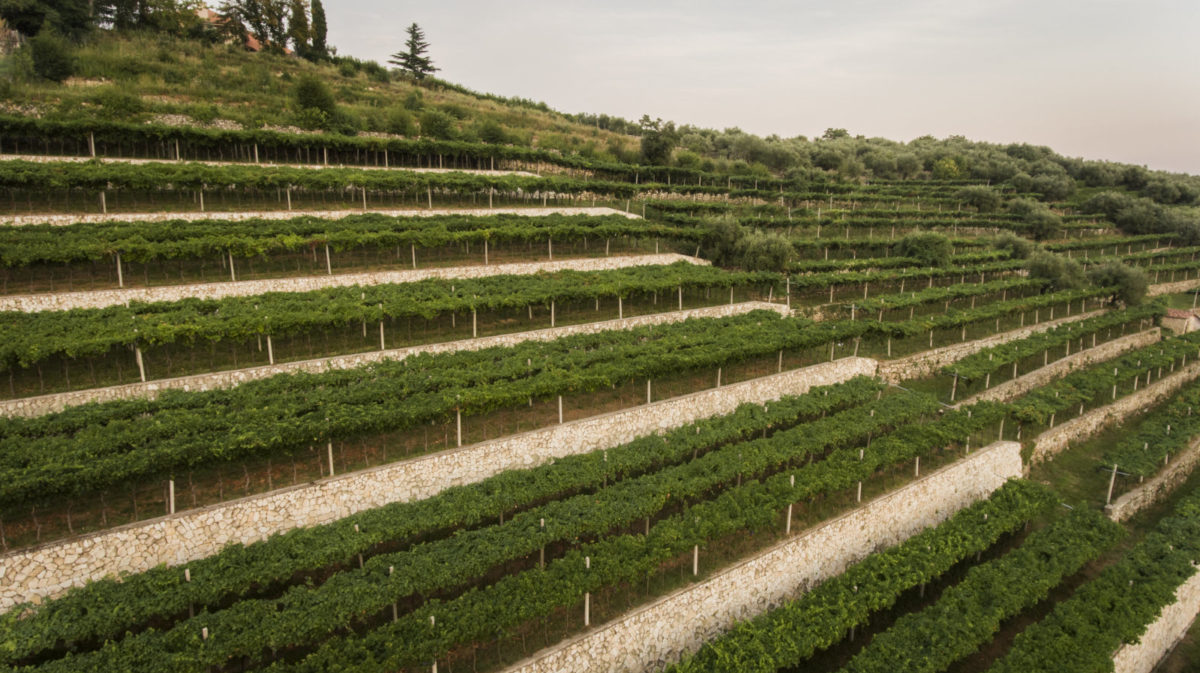 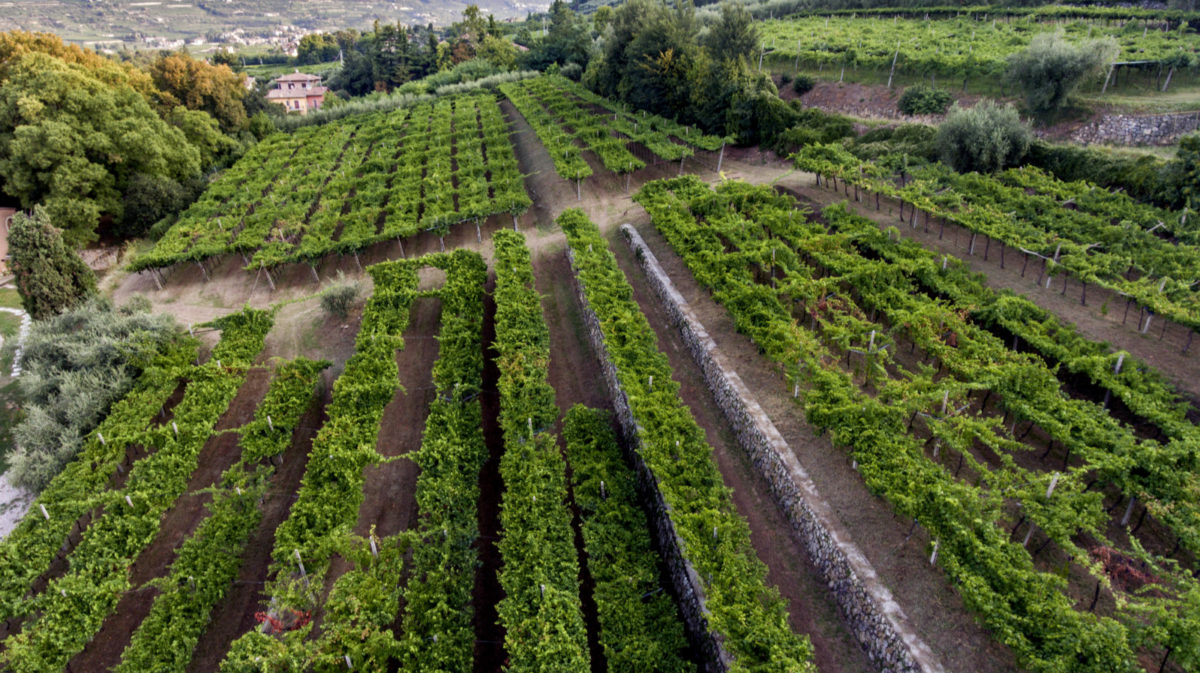 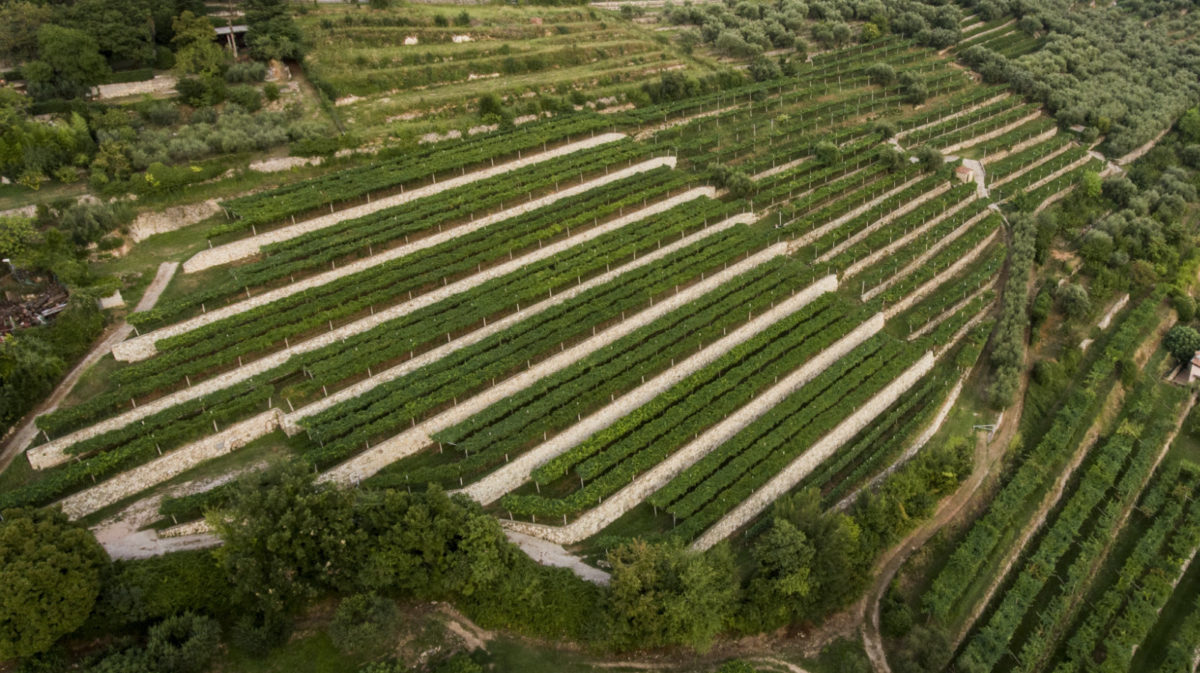 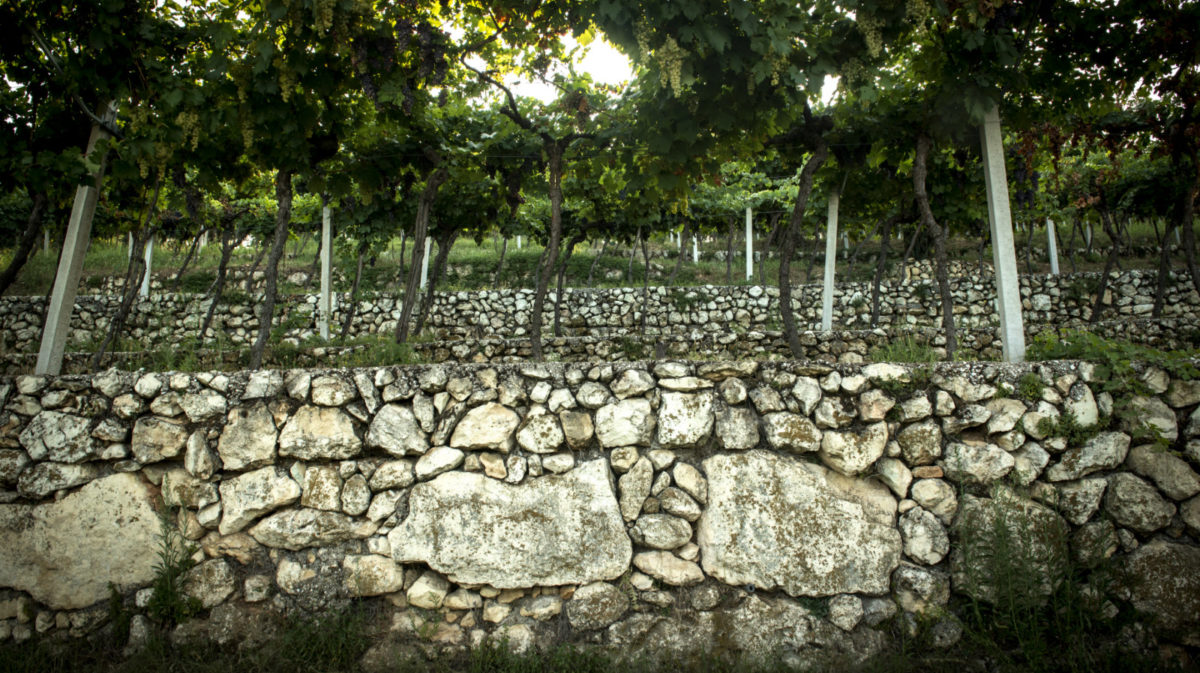 Monte Olmi is the name of the vineyard purchased by Lorenzo Tedeschi in 1918 that is situated in Pedemonte in the community of San Pietro in Cariano in the heart of Valpolicella Classica.
The vineyard extends over 2,5 hectares, has a southwest exposure, and is planted on “marogne”or dry stone wall terraces. The steep slope ensures good drainage in case of heavy rains, while the depth and predominantly clay structure help retain moisture during periods of drought.
The terrain, which is of morainic origin, is by its nature marly limestone. Clay and calcium are present in equal measures, both of which favor a robust structure and good color intensity.

The type of plantation is traditional pergola with a low density equal to 3,500 plants per hectare, and a production yield equal to 6,000 kg/hectare.

The grapes selected from this vineyard are destined for the production of Capitel Monte Olmi Amarone della Valpolicella DOCG Classico Riserva. 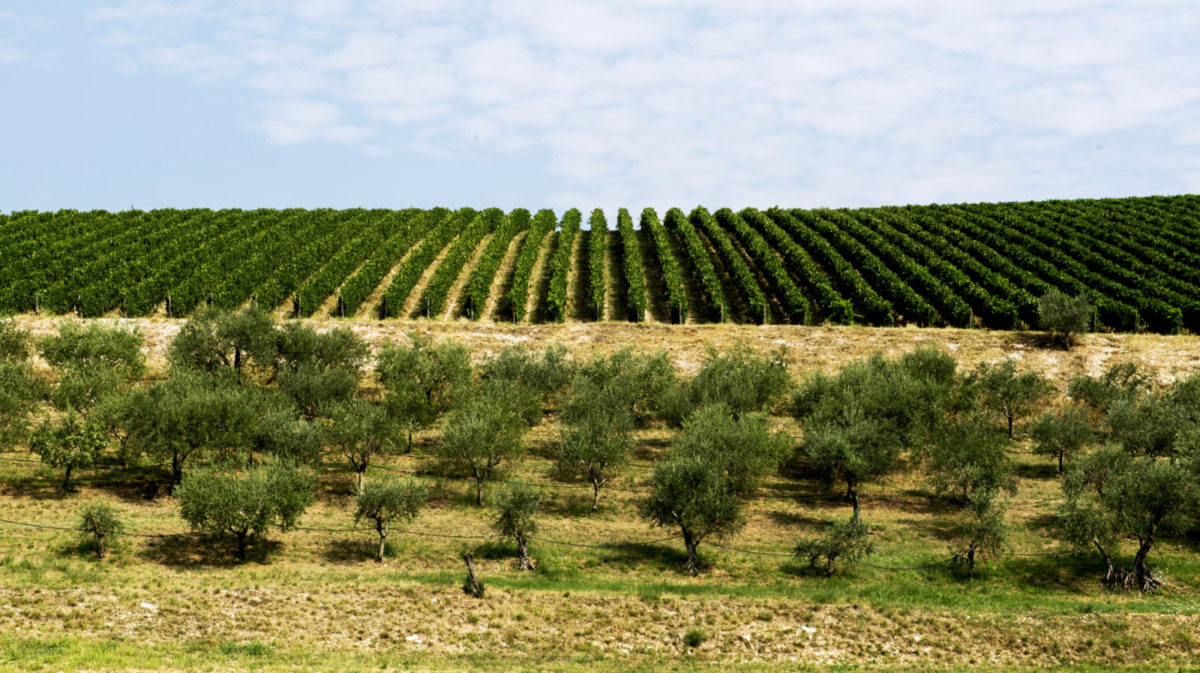 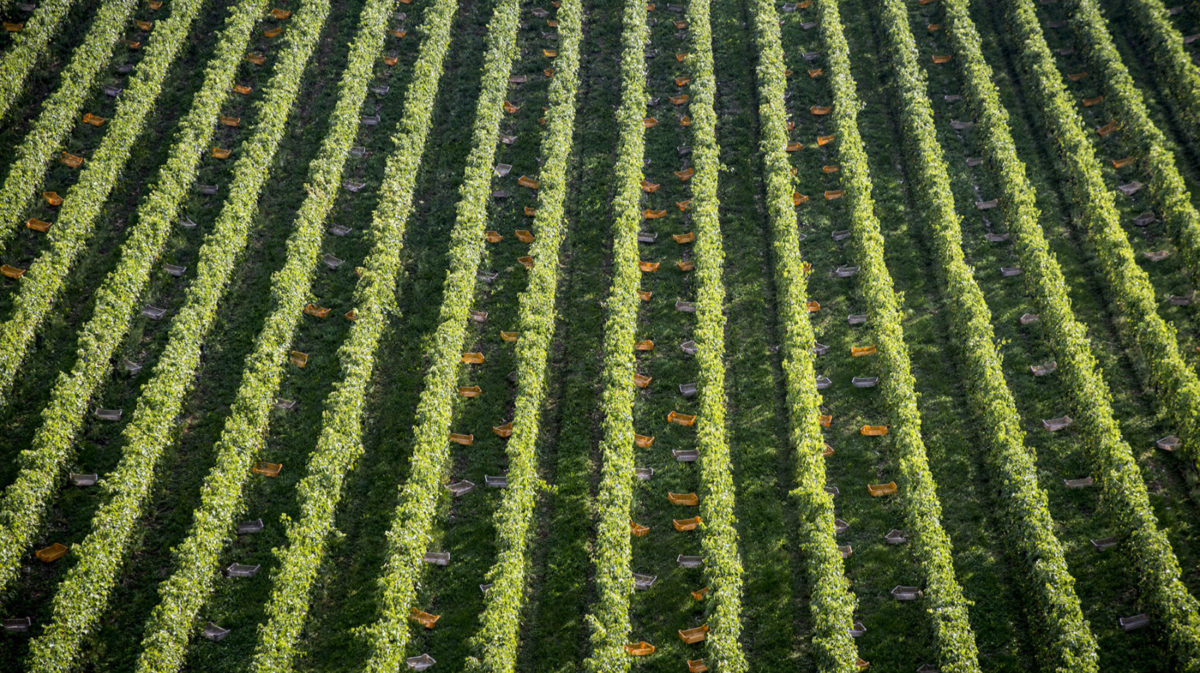 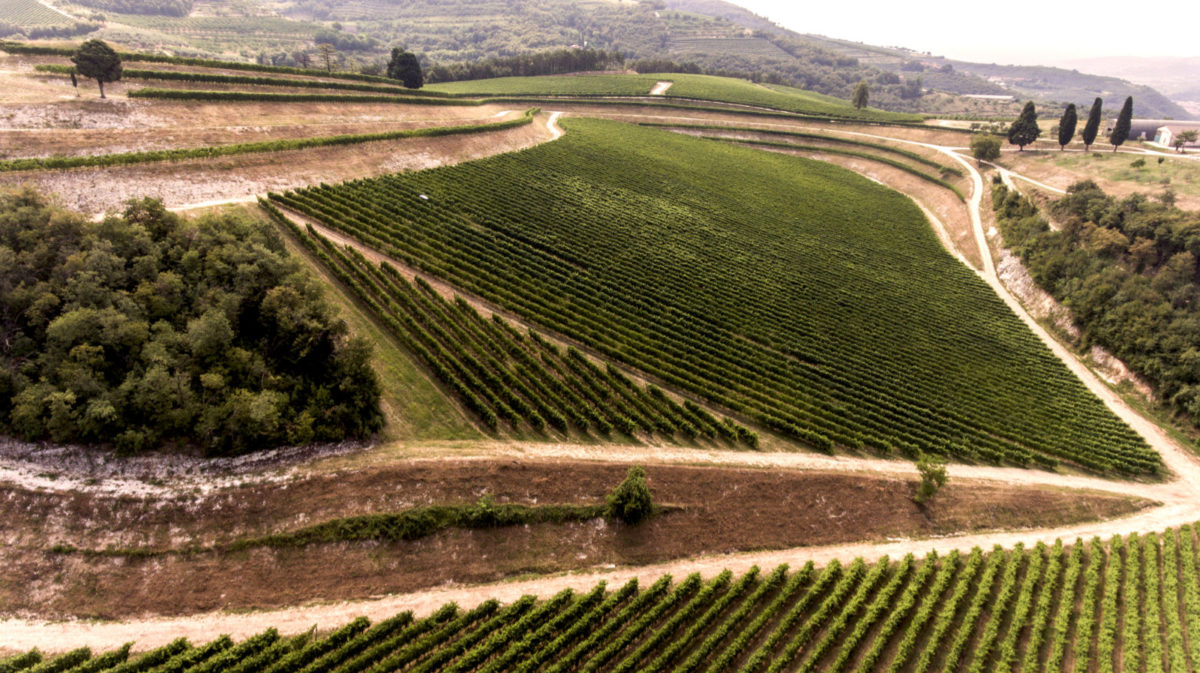 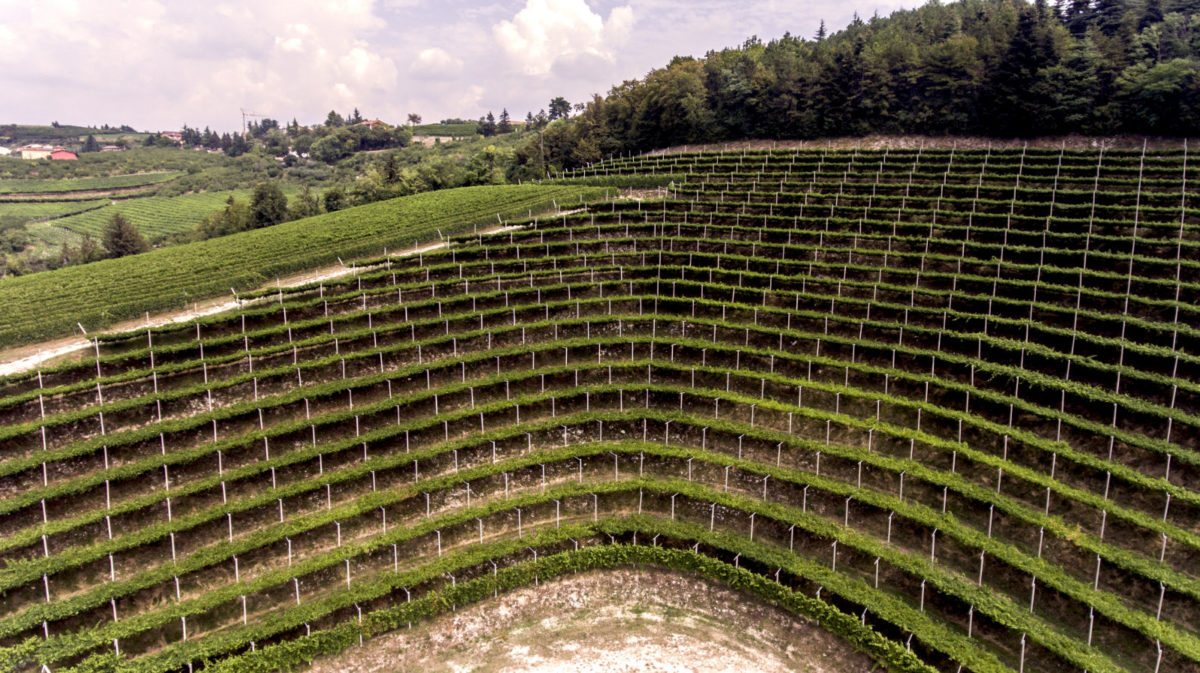 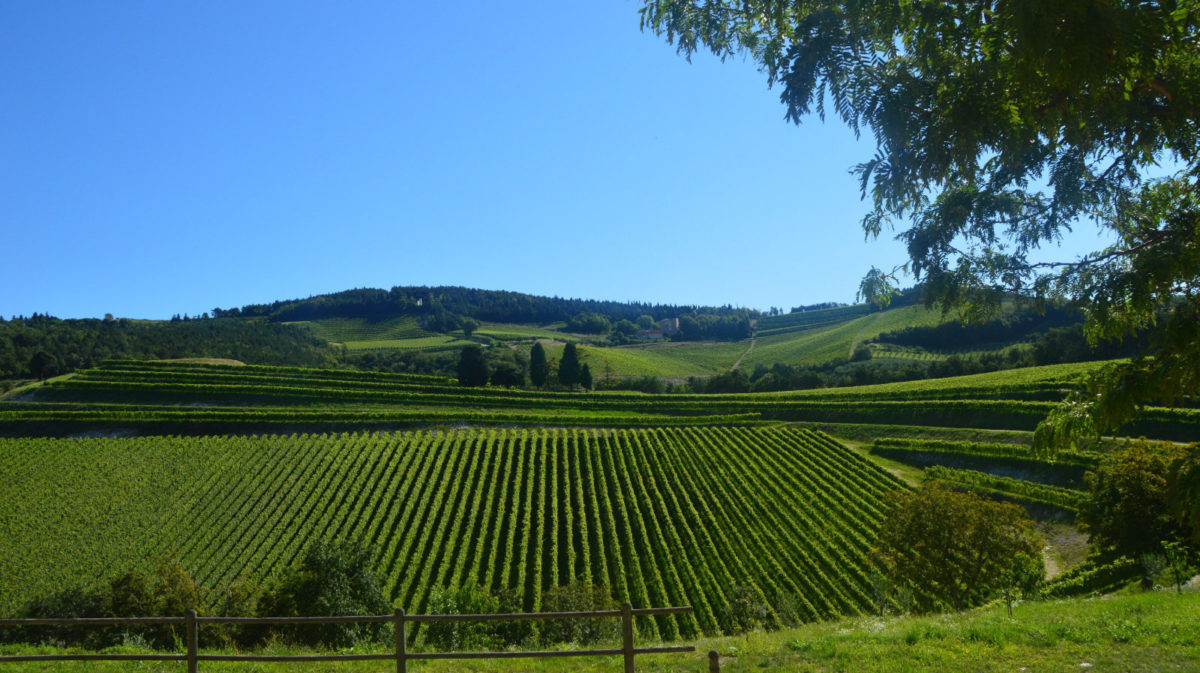 Maternigo, which means “mother’s land” is the name of the property we purchased in 2006 in the Valpolicella DOC (Denominazione di Origine Controllata) zone of Valpolicella between the communities of Tregnago and Mezzane di Sotto.
The property covers an area of 84 hectares and includes a construction of probable monastic origin, the oldest portion of which dates back to the 15th century.  The property sits on a hill that dominates the entire backdrop and is made up of an additional 51 hectares of forest as well as two hectares of olive groves that produce the typical Veronese varietal.

The vineyards planted on this estate cover a surface area of 33 hectares along an altimetric range of between 200 and 450 meters above sea level with southeast and southwest exposure. The terrain is composed of marly limestone with abundant skeleton. The presence of limestone varies across the various pedological units. The planted vines are the classic variety found in Valpolicella and are in large part destined for the production of our winery’s red wines. The vineyard named Impervio due to its extreme slope has given rise to the Valpolicella Superiore Maternigo, while the Barila plot has been particularly suited for the production of the cru Amarone della Valpolicella Maternigo.

The Lucchine vineyard is located in Pedemonte in the heart of the Valpolicella classica. The vineyard is planted partly with the Guyot training system and partly with Pergoletta. The terrain is alluvial in origin, rich in pebbles and coarse gravel, and as a result well drained. The production yield is 10,000 kg/hectare. This vineyard gives forth the fresh and fruity Valpolicella Classico thanks in part to the traditional vinification that the grapes are subjected to. This wine is suitable for every meal.

“We have unraveled the character of each of our vines, and now we know how to manage them” Riccardo Tedeschi

The Agricola Tedeschi grape growing techniques have always been based on tradition combined with modern techniques as well as natural principles. In 2010 we began research on zoning and vineyard characterization on the Maternigo Estate and on the Classica zone. Zoning, in other words the pedological study of the vineyards, has always been viewed as the necessary point of departure for high quality viticulture. Such a path is an onerous and demanding task, but the fruits of the labor often yield important and permanent results.

Over time we have established grass cover crops to reinforce the vineyard’s natural defenses, launched a plan of hydric stress control, increased organic carbon content, enriched the terrain through the sowing of seeds for essence companion planting and started using organic fertilizers.

Additionally, we have adopted an integrated attack to combat the grape berry moth and botrytis through the use of targeted bacteria as well as natural extracts to combat against peronospora and powdery mildew.

We are keenly aware of how the composition of the earth can influence the aroma of a wine, and as such, in the spirit of charting new territory in Valpolicella, we have launched a study on the aromatic characterization of our vineyards.

Other research is also underway to investigate how best to control the maturation of grapes as a function of climate change.
The research continues in order to ultimately make our winery completely sustainable in terms of agricultural management as well as in our wine production chain. This approach makes clear the manner in which the Tedeschi family is inextricably linked to tradition while at the same time has a view towards the future. Today the winery has been certified according to the standards of   Biodiversity Friend ed Equalitas. Write to us if you are interested in starting a discussion or want to receive a copy of our Sustainability Report.

This grape is characterized by a small, compact bunch of grapes with a pyramidal shape. The berry is ellipsoidal with waxy skin and a blue-violet color. The berry is susceptible to botrytis. The grape gives rise to a wine with a lively red color and a marked taste of cherry and raspberry. The wine has an optimal structure,and is complex and elegant.

This grape comes in a large, compact and pyramidal bunch with two wings. The berry is large and ellipsoidal with thick waxy blue-voilet skin. The Corvinone grape is more susceptible to botrytis than the Corvina grape. The grape yields a wine that has a lively red color, is rich, velvety and intensely fruity especially those grapes that are grown on hillsides.

The bunch for this grape is compact and cylindrical-pyramidal in shape. It has only one wing. The berry is cylindrical, has thick skin and is blue violet in color. It is highly resistant to disease and therefore particularly adapted to drying. It gives rise to a wine with a lively red color that has clear notes of cherry and forest fruit and has good acidity.

This grape comes in a compact cylindrical pyramidal bunch with a single wing. The berry has an average dimension, is ovoid and has thick, blue-black skin. It yields a wine that is ruby red, intense, fruity, tannic, with good acidity and great body.

This website uses cookies to improve your experience while you navigate through the website. Out of these, the cookies that are categorized as necessary are stored on your browser as they are essential for the working of basic functionalities of the website. We also use third-party cookies that help us analyze and understand how you use this website. These cookies will be stored in your browser only with your consent. You also have the option to opt-out of these cookies. But opting out of some of these cookies may affect your browsing experience.
Necessary Always Enabled

Any cookies that may not be particularly necessary for the website to function and is used specifically to collect user personal data via analytics, ads, other embedded contents are termed as non-necessary cookies. It is mandatory to procure user consent prior to running these cookies on your website.