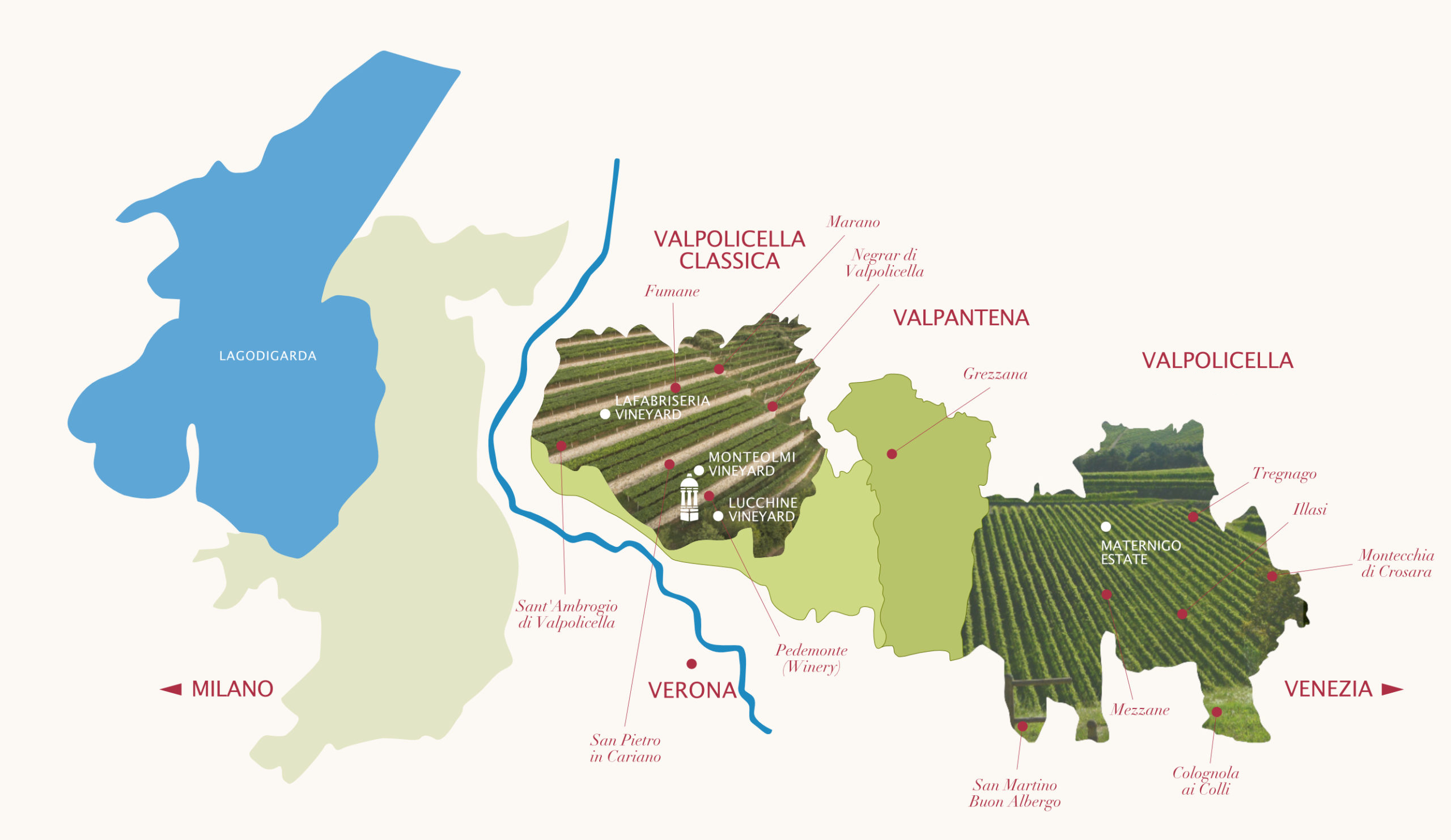 The winery and the vineyard

Tedeschi wines have become synonymous with terroir and Valpolicella around the world as a result of their constant and meticulous labor in the vineyard over the years.
Nothing is ever left to chance. The profound attention to the vineyard includes research to uncover a perfect interaction between the characteristics of the soil, the microclimate, the sun exposure, the choice of the most appropriate varietals, and the cultivation system.

Tedeschi supports research and experimentation as fundamental tools to guarantee quality production. Today the company, which has always respected the environment, is sustainable and certified according to the standards of Biodiversity Friend and Equalitas.

A great wine – authentic and rich in character – can only emerge from perfect grapes.

As producers of Valpolicella, Amarone, and Recioto in Valpolicella for centuries, along with the obligatory autochthonous grapes in our own vineyards, we also cultivate a small percentage of lesser-known varietals that are nevertheless traditionally used in Valpolicella including Oseleta, Dindarella, Negrara, Rossignola, and Forselina.

“We maintain that our wine must be looked upon as the progeny of our land and our history. The authenticity of our wines was born of true passion and careful research that began 400 years ago”

“We have revealed the character of each of our vines, and now we know how to manage them”

In 2010 we began research on zoning and vineyard characterization on the Maternigo Estate and on the Classica zone. Zoning, in other words the pedological study of the vineyards, has always been viewed as the necessary point of departure for high quality viticulture. Such a path is an onerous and demanding task, but the fruits of the labor often yield important and permanent results. From the very beginning, Riccardo Tedeschi has always asked himself if, once defined, would it be sufficient to manage zones that had the exact same characteristics in the same manner. In other words, do different vines that are grown on the exact same soil type behave in the same manner? In order to answer this question, zoning research was carried out alongside vineyard characterization. Characterization analyzes the soil and measures how the plant expresses itself during the vegetative phase. Once any differences were quantified, it became possible to intervene in a targeted and fine-tuned manner to obtain uniform vegetative development and production across all vineyards, which in turn, led to a positive impact on the quality of the wines. The work of zoning and characterization has permitted the generation of a soil map. Data have revealed that the Maternigo Estate is comprised of 7 different areas with unique pedological characteristics in terms of position, soil, organic matter, and drainage capacity. In the Valpolicella Classica, both in the Monte Olmi vineyard and La Fabriseria vineyard, two distinct areas have been identified. Each vineyard area has been delineated in terms of the type of soil encountered. The data reveal a terroir that is very highly suitable and of excellent quality. The defining characteristics of each parcel and, as a result the wines produced from the different vineyards, can be attributed to differences in microelements, which at times seem unremarkable from a quantitative point of view. The results from the zoning and soil characterization research have prompted a series of interventions in the vineyards. Over time we have established grass cover crops to reinforce the vineyard’s natural defenses, launched a plan of hydric stress control, increased organic carbon content, enriched the terrain through the sowing of seeds for essence companion planting, and started using organic fertilizers. Additionally, we have adopted an integrated attack to combat the grape berry moth and botrytis through the use of targeted bacteria as well as natural extracts to combat against Peronospora and powdery mildew. We are keenly aware of how the composition of the earth can influence the aroma of a wine, and as such, in the spirit of charting new territory in Valpolicella, we have launched a study on the aromatic characterization of our vineyards.

Sustainability in the winery

In 2018, Tedeschi made the decision to take the necessary steps toward voluntary certification of sustainability, which required a 360° examination of the process with particular attention to the ethical issues imposed by certain markets. Today the winery has been certified according to the standards of Biodiversity Friend and Equalitas, a distinguished sustainability project dedicated to the production of wine, which provides guidelines related to environmental, social, and economic practices as well as biodiversity indices. Notable among the standards is the drafting of a sustainability report in which various points are analyzed, including the analysis of critical areas, as well as objectives and actions for improvement. In 2019 our commitment took on not only the 360° process, but added to it the biodiversity indices of carbon balance and water balance for the entire organization as well as the cru wines. Having done this, and after analyzing all of the processes and each of the products, it became evident that almost half of the emissions and energy consumption came from the processes associated with packaging. We, therefore, made the decision to substitute the bottles designated for the Amarone, as well as for the two Valpolicella cru, Fabriseria and Maternigo, with lighter bottles. In this way, we were able to reduce the impact on emissions related to the production of glass as well as the emissions related to shipment of the finished product. Write to us if you are interested in starting a discussion or want to receive a copy of our Sustainability Report.

“For businesses that work in the food sector such as ours, this growing awareness goes hand in hand with the ability to furnish products that combine food security with constancy in product availability, respect for the environment, appropriate price point, and, as such, adds value for the client while respecting the rules of the market and the market sector.”

Withstanding the heat, knowing how to protect from sunburn, and ensuring that ripening continues for as long as possible are only some of the factors that have become more critical for the grapes of Valpolicella as a result of climate change. Tedeschi is experimenting with new cultivation techniques in the vineyard in order to best manage the consequences of climate change. “Supporting research in the field of winegrowing is not only a duty for anyone who values our wine, but also translates into doing what is best for our territory. The alarm has sounded as a result of climate change, and we must absolutely protect the territory and our heritage,” explains Riccardo Tedeschi. “The effects of climate change are obvious. We can no longer avoid confronting the challenges that arise as a function of global warming and increasingly more intense atmospheric phenomena that are becoming more and more worrisome.” Thanks to the valuable contributions from Professor Giovanni Battista Tornielli of the University of Verona, Tedeschi has begun experimenting with techniques for vineyard management. Reduction of the leaf system through topping and leaf removal during different periods and in the median apical canopy above the grape clusters is carried out in order to dealy ripening. The vegetative phase of the plant is delayed through late pruning and even double pruning. Natural treatments, for example with plant growth regulators, are also being used to delay grape ripening until the end of September and the beginning of October.

“Ripening during cooler temperatures has several advantages, including greater complexity and aromatic intensity of the grapes as well as better wine color beyond the characterization and differentiation of the territory the grape is grown in, or cru. We are in an experimental phase. Our winery is committed to continue the research, the effective results of which will be naturally evaluated only after several years.”

The commitment the Tedeschi winery has to its own territory is underscored by the research the family has undertaken since 2017 in collaboration with Professor Maurizio Ugliano of the Department of Biotechnology at the University of Verona on the aromatic character of grapes and wines from a single vineyard as well as on the principle factors involved in their expression, focusing primarily on Amarone, but also including Valpolicella. This study is the first of its kind. Research on the geotypical nature of the aroma of wines brings to light the characteristics not only of an entire territory, but also its subzones, allowing for the emergence of elements tied to the culture and traditions of individual areas, and in this way, linking together humanity, an integral part of production, and the geography of the territory itself. Aromatic characterization of the soil is just another part of the scientific research carried out by the Tedeschi family, making clear once more the passion the winery has for self-improvement and the drive to guarantee their future as a world class protagonist within the territory of Valpolicella. The study of this type of diversity does not translate into ranking zones as better or worse, but rather creates a solid base upon which different styles can be created, and in turn, produce products that are always more interesting and distinguishable. The study is being carried on the Corvina and Corvinone varietals, which are cultivated in five different vineyards: Monte Olmi and La Fabriseria in the Classica zone, Barila, Impervio and Anfiteatro on the Maternigo estate in eastern Valpolicella.