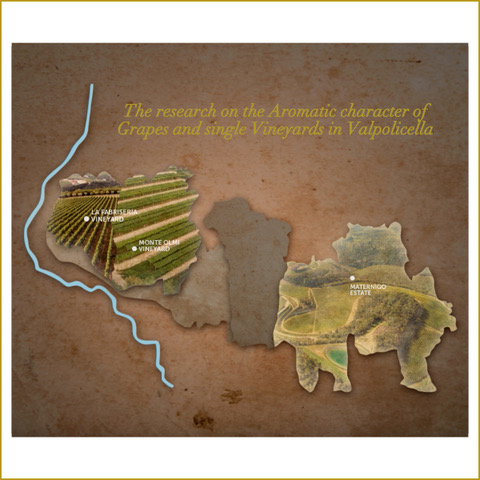 The Tedeschi winery has always been on the frontline for the promotion of projects that support their own territory. Starting in 2017, a series of studies on the aromatic character of grapes and single vineyards as well as on the main factors involved in their expresssion were initiated in collaboration with Prof. Maurizio Ugliano and the Department of Biotechnology at the University of Verona. The focus has been primarly on Amarone cru: Monte Olmi, La Fabriseria and Maternigo (Anfiteatro, Bàrila  and Impervio) estate. Today, after four years of research, the results of this long and prolific partnership, which no doubt will continue to bring to light new developments, are being presented.

Through this study, unique in its field at both the national and international levels and cited by several publications, it has been possible to define the aromatic footprints of each site.

Among the main aromatic components uncovered across the different areas, terpenes, which are abundant in the plant world, are most notable. Terpenes lend the floral and balsamic scents that are important markers of Valpolicella wines obtained from fresh grapes as well as wines in the style of the Tedeschi Amarone. Some norisoprenoids, which intensify the perception of red fruits, along with benzenoids that accentuate the aroma of sweet spice, contribute to the different aromatic signatures that were observed, particularly in the case of the Amarone. These components are present in the grape as precursors that are “revealed” during vinification, and the vineyard environment strongly influences their content. Though it was expected that they would contribute to the different signatures, these results represent the first time that the important role of terpenes in Valpolicella wines has been made clear. More surprising was the observation that even the esters from fermentation, which are essential for the fruity character of wines, are distinctive and vary as a function of the geographic orgin of the grapes. With respect to components that are not present in the grape itself, but components producted by the yeast during fermentation, the research made clear that the aromatic expression of the terroir is linked not only to the composition of the grape itself, but also to the manner in which the composition of the grape influences fermentation. During the period of research, it was further noted that the vintage year had an effect that expressed itself with distinct characteristics that were detectable in the wines that were produced.

These findings have paved the way for the creation of new management strategies both for the individual vineyard and the vinification process, including methods to bring out the entirety of a grape variety’s identity and typicity.

““The results from this work – underscores Riccardo Tedeschi, enologist – have heightened our awareness of our ecosystem as well as our respect for the territory and our products.”

“The data that we have obtained”, explains Professor Ugliano, “clearly indicate that it is possible to develop indices related to grape quality and wine longevity, particularly on the basis of terpene profile, which can be used going forward to map out vineyards in terms of vintage quality as well as for the optimization of practices in both the field and the winery.”

These elements of typicity exist inside the analyzed territory and demonstrate how much these markers serve to identify  a style, a true and unique aromatic footprint for each of the five vineyards included in the study.

“Although we cannot always expect the exact same results from each and every vinification given the variability of nature, we can nevertheless count on the enhanced detection of a single element or even several aspects that will always be consistent with a type of signature associated with the winery. It is a sort of message that is translated into an identifying code that is tied to a zone and a geographic identity akin to a “guiding thread” or “fil rouge” that provides a sense of the place through the history of our winery and our wines.”